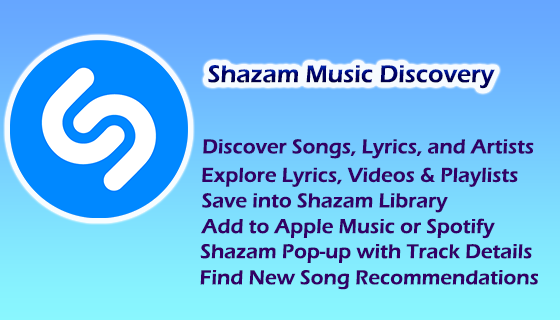 Shazam is a music discovery app available for Android and Apple devices. It’s main feature is that it identify the music that is playing near you.

Not only song identification, Shazam can show the lyrics of that song along with other useful information of the track. It help us to find the music without much search over the Internet.

If you are using third party apps like Youtube, Spotify, Shazam, Snapchat, it will pop-up a window that helps to recognize the song along with the details. It can be also used with Siri on Apple devices.

The unfamiliar and non popular songs can be recognized and get details like Lyrics, Video, Artists etc from My Shazam option.

Shazam Music Discovery and other Features

The Shazam have a database of millions of tracks. Whenever you tap on the Shazam button, it listens and create a digital fingerprint of the audio. Then it is matched against the songs in Shazam database and provide you with the song information.

If you add any favorite artist to your Shazam playlist, you can also see other music from that author. This discovering feature helps you to find rare music and make it viral through the power of Internet.

Similar songs can be found easily and streamed using Shazam music app. The Shazam Library will keep track of all identified music and provides easily tracking.

The Shazam offline service helps Shazam to save music you need and find it’s details when you are connected to Internet next time. By browsing through recommended tracks, you can easily find new tracks and add to your favorite list.

If you need to go through different tracks without loosing the fun of music, just put the Shazam real time chart to start playing the music.

If you are using iPhone, iPad, or iPod touch, you can add the Shazam shortcut to the phone Control Center. It helps to easily select music recognition without opening the Shazam application. You can add this shortcut from phone settings and this feature is only available for iOS 14.2 or later versions.

You can then easily add these music to your list in a single tap. The Shazam logo QR code found on magazines, books and other areas can be scanned to explore and access the music list.

The most Shazamed tracks by can be seen from Shazam charts. You can view and listen Top 200 tracks or discover trending tracks by Global or by each country list. If are a already a Apple Music subscriber, the Shazamed songs will be automatically added to My Shazam Tracks playlist.

The Auto Shazam option is to automatically identify the songs playing around you. You can see the identified tracks from My Music and group them by date.

The Shazam data can be downloaded by requesting a copy of the data from your Shazam account. The data will be received in your given E-mail address within 30 days.

Manage your Assignments, Homework, and Tasks in Saturn